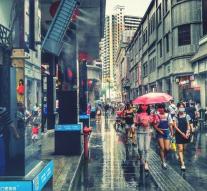 peking - 751 million Chinese use internet and online services. This is evidenced by a report that was presented on Friday. Compared to December 2016, the internet population has increased by 2.7 percent.

The lion's share of the Chinese uses the smartphone to be online. It's about 724 million people (over 96 percent). Mobile checkout is by far the most accomplished online transaction. Over 500 million people do that in one way or another. For example, in China, via payment apps or scanning QR codes. This variant is used primarily for physical shopping or buying snacks on the street.

It is also remarkable that in the first half of 2017 the online ordering of food took a flight. The many Chinese versions of Home Care. Nl saw their market share increase by more than 41 percent.