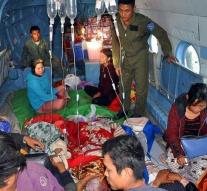 - More than three thousand people have fled from Myanmar to China, due to fighting between the government and rebels. Among them are injured refugees. Stray shells are even cases across the border on Chinese soil, saying China.

Four ethnic armed groups in northern Myanmar fighting with security forces. The purpose of the Myanmar government leader and Nobel laureate Aung San Suu Kyi thus gets further away. She had promised to make peace with the ethnic minorities who feel discriminated for years.

China has sent extra guards to the border between China and Myanmar.

The fighting of recent weeks have begun following an attack on October 9 at three border crossing points on the border with Bangladesh by militants. In addition, nine policemen were killed. The militants were Rohingya Muslims. Also in this group are many people fled, but to neighboring Bangladesh.