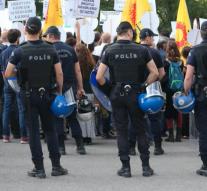 ankara - In Turkey, 12 801 officers suspended because they may have links with the network of Fethullah Gulen. It informed the authorities on Tuesday. The organization of the Gülen was residing in the United States, according to the government in Ankara after the failed coup in July.

The number of suspended police officers, including commanders in 2523, representing about 5 percent of the entire Turkish police.

In total, have been dismissed or put on non-active after the attempted coup about 100 000 soldiers, police, civil servants or members of the judiciary. Around 32 000 people have been arrested.

The state of emergency was declared after the coup extended on Monday by three months. Erdogan said last week that the state of emergency remains possible effect for a year. Human rights groups and Western critics fear that Erdogan engages the failed coup to eliminate political opponents.