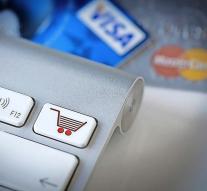 the hague - Dutch households bought more than 1 billion euros last year for products from foreign online stores in the European Union. According to preliminary figures from the Central Bureau of Statistics (Statistics Netherlands), this represents an increase of more than a quarter compared with 2015.

Especially at German online stores Dutch consumers ordered frequently and especially shoes and clothes. More than half of all purchases were made at a home from a German company. Remotely followed webshops based in the United Kingdom (12 percent) and Belgium and Italy (both 8 percent).

In addition to shoes and clothing, which accounted for 60 percent of sales, Dutch consumers gained business as animal feed, home furnishings and food supplements from 'ver'.

In the last two years, Dutch consumer spending on webshops in Europe has increased by 62 percent. At Dutch webshops, 45 percent more was spent over two years.