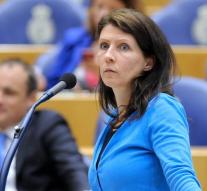 - Esther Ouwehand of the Party for the Animals (PvdD) returns after the fall recess back in the House. It was almost a year ago to deposit its Chamber membership temporarily due to illness.

Ouwehand was replaced since last year November 17 by biologist Frank Wassenberg, States member in Limburg and a member of the party board. He made Friday via Twitter announced that Ouwehand returns to the House.