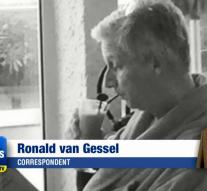 brussels - In Belgium fuss over a picture of King Philippe, when all the alarms went off in Brussels for the major terrorist threat calmly sipping a glass at a spa in Brittany. The reaction of the king does not help to calm things down. He speaks of " trifles compared with the suffering of families of victims of the attacks in Paris and Bamako".

The photo was published in the French satirical weekly Le Canard Enchainé.

King Philip and Queen Matilda had previously planned the weekend in Brittany and the reason for their short stay there is a private matter, a palace spokesman said Tuesday at Het Nieuwsblad. While Filip not directly responded to the noise, he left under Latest News yesterday that he " the entire afternoon spent with the families of the victims of the attacks in Paris and Bamako ". " I've heard a lot of suffering. That helps to relativize certain trivialities which mean little to the very essence of life. "

There was an official response from the royal family. It was reported that the photo " which was taken without permission in the private sphere and showing not the head of state in office, " regrets. " This is not an elegant way of working. As everyone also has the king 's right to privacy.