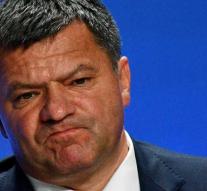 moscow - Russian authorities have declared the outcome of a controversial regional election invalid. Voters must therefore once again go to the ballot box in the southeastern region of Primorski, where sitting governor Andrej Tarasenko of pro-Kremlin party United Russia previously surprisingly won the election.

Tarasenko was lagging behind when almost all the votes were counted, but ran at the last minute. Supporters of his communist challenger did not trust it and went into the streets in Vladivostok. The head of the national electoral council later ruled that there had been irregularities around the ballot box.

In the meantime, according to a spokesman, the regional electoral council has decided that the election must be repeated within a few months. The Kremlin had also expressed itself. President Putin believes it is more important, according to his spokesman, that elections are fair than that his preferred candidate wins.