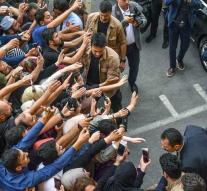 ankara - Seated President Erdogan and governing party AK have benefited greatly from their position of power in their election campaign. For example, there was much more room for them in the media than for the opposition. That conclusion is drawn by observers from the Organization for Security and Cooperation in Europe (OSCE) about the Turkish elections of Sunday.

The state of emergency that has been in force for almost two years has created barriers to the opposition parties' campaigns. For example, election meetings were less often permitted and freedom of speech was limited, according to the OSCE.

In a preliminary report, the organization says it is satisfied with the high turnout over the elections. However, observers found a more explicit presence of the police in polling stations compared to previous elections.