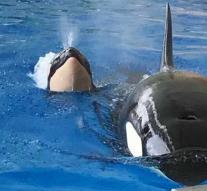 - Orca Morgan gave birth to a calf on Tenerife. According to Loro Parque, the sea park where mother and young are staying, they are doing well. The animals swim together through the basin.

'Morgan showed from the first moment that she is a good mother', let the park know.

Morgan was found severely weakened in the Wadden Sea in 2010 and taken to the Dolphinarium to recover. In 2011 the animal moved to Tenerife with the consent of the Cabinet. Morgan was included in a group of six species.