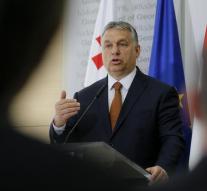 brussels - Hungarian Prime Minister Victor Orbán promises to align the contested university law with European legislation. That he promised Saturday in Brussels after an 'open-minded' discussion, according to the European People's Party (EPP), where Orbán Fidesz party is part of the European Parliament. 'The EPP will not accept that basic values ​​are violated and the constitutional state is restricted', the party writes in a statement.

The European Commission launched a legal procedure against Hungary last week because the law violated the right to academic freedom and freedom of establishment.

More and more EPP members, including CDA-European parliamentarians, demand that nationalist Orbán adjust the law and respect European values. Orban has assured 'taking all necessary steps' to address the objections of the commission, according to party chairman Joseph Daul.

The law threatens to close the Central European University (CEU) in Budapest and the EVP is opposed. Orbán is in war with the founder of the CEU, the liberal Hungarian-American philanthropist George Soros.

The EPP also opposed the 'misleading' national consultation entitled 'Stop Brussels' organized by the Hungarian government this month. 'Unacceptable, this blatant anti-EU rhetoric. '' The constant attacks on Europe that Fidesz has launched for years has reached a level we can not tolerate, 'said the party that supplies the largest parliamentary party. 'Our beliefs are deeply pro-European. '