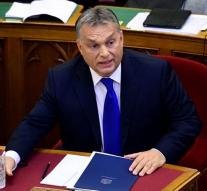 budapest - Although the majority of his countrymen was failing at the referendum on the relocation of refugees, has Prime Minister Viktor Orban of Hungary itself still declared the winner. 'A great result,' he said afterwards.

The Sunday referendum was invalid because only 50 percent of the required voters showed up. Approximately 3.3 million people voted, more than 40 percent of the total. The question in the referendum whether Europe can determine how many asylum seekers must include Hungary. No, answered nearly all voters (98 percent). That was confirmation enough Orban his politics.

The Prime Minister had also unchanged know that he will bring to the man's policy in Brussels. He remains at an oversold asylum policy of the European Commission.