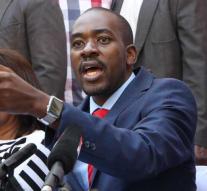 harare - The Zimbabwean opposition has come to the Constitutional Court to challenge the result of the presidential election. 'We have successfully submitted our court documents,' said the main opposition leader, Nelson Chamisa.

The Zimbabwean electoral commission has declared incumbent president Emmerson Mnangagwa the winner of the election. He received 50.8 percent of the votes, just enough to escape a second round of elections. The opposition does not trust it and thinks it has been fraudulent.

The run-up to the elections was relatively peaceful. Mnangagwa had promised fair elections after the departure of his predecessor, Robert Mugabe. After the ballot, the flame still hit the pan. There were at least six deaths during protests. The opposition eventually lost in both the presidential and parliamentary elections.