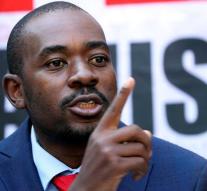 harare - The Zimbabwean opposition leader Nelson Chamisa refuses to accept his election defeat. He claims to have a 'legitimate claim' on the leadership of his country.

The Constitutional Court of Zimbabwe ruled on Friday that it has not been proven that incumbent President Emmerson Mnangagwa fraudulently won the July election. Chamisa says to disagree with that statement. He does not intend to attend the swearing of Mnangagwa on Sunday.

The disagreement over the election results casts a shadow over the first election since the departure of the autocratic leader Robert Mugabe, who had been in power for decades. His successor Mnangagwa had promised fair elections. That had to get the impoverished state in the south of Africa out of its international isolation.

The run-up to the ballot box was relatively peaceful, but later the flame still hit the pan. Several people died during protests. The opposition, which lost the presidential and parliamentary elections, thinks that there has been fraudulent to keep Mnangagwa in the saddle.