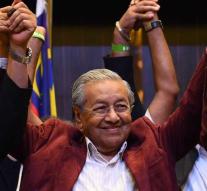 kuala lumpur - The opposition surprisingly won the elections in Malaysia. The official result shows that the opponents of Prime Minister Najib Razak can count on at least 112 of the 222 seats in parliament. With this, the opposition parties have a parliamentary majority in their hands.

The 92-year-old opposition leader, former Prime Minister Mahathir Mohamad, has declared victory. He expects to be appointed Prime Minister on Thursday. Thousands of opposition supporters took to the streets in Kuala Lumpur to celebrate the election results. They waved flags, cheered and chanted.