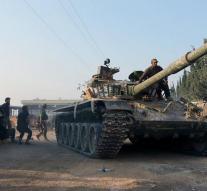 aleppo - Syrian rebels have the siege of the city of Aleppo broken by the government army. That the Syrian National Coalition, said an alliance of the opposition, said the Arab news channel al-Jazeera Saturday.

The rebel group Ahrar al-Sham reported that rebels have got control of the ramosa district to the south-west of Aleppo. Thus, they would be the,, road paved to the city. ' According to the Syrian Observatory for Human Rights, the fighters who put his broken contact with the siege by rebels who are in the eastern part of the besieged city.

The Syrian government army surrounded the northern city of Aleppo mid July. In the eastern part are an estimated 250 000 civilians controlled by rebels.