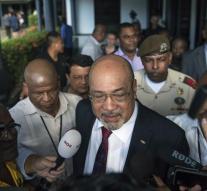 paramaribo - A few thousands of supporters of the five opposition parties in the Surinam parliament protested against President Desi Bouterse on Saturday. The political leaders called on Bouterse to resign if he did not change his 'mismanagement'.

Suriname has been in a severe economic crisis for almost two years. Because of the high inflation, more and more people are no longer getting around with their salary. The financial problems are caused by low prices of gold and oil, Suriname's main export products. But bad government financial management and corruption also contributed to the troubled position.

Chandripersad Santokhi, the leader of the biggest opposition party VHP, called on Bouterse to address poverty, corruption and health problems. 'But if you can not, you will return the mandate. Give the country back to the people, 'said Santokhi.

Also, Ronnie Brunswijk, former leader of the Jungle Commando and bodyguard of Bouterse, spoke to the crowd. He is now leader of the General Liberation and Development Party (ABOP). According to him, Bouterse did many promises, but he did not comply. Therefore, he has to return his mandate now, says Brunswijk.

The turnout was lower than the organizers had expected. They had counted on 15,000 to 20,000 people.