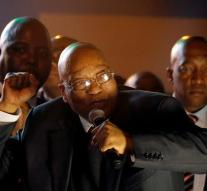 cape town - The South African opposition DA called on parliament to dissolve and hold new elections on Wednesday. The party suffered a defeat a day earlier when a motion of suspicion against President Jacob Zuma was rejected by parliamentarians.

DA leader Mmusi Maimane acknowledged that government party ANC won the vote, but said that Zuma's party had lost the confidence of the people. He thinks that the voter is now speaking. Maimane announced Thursday to come up with a motion that should lead to early elections.

It is the question of how likely the opposition plan is. The ANC has 249 seats in the 400-seat parliament in Cape Town. After voting on Tuesday, Zuma stated that allegations that he had lost the support of the people represented propaganda. 'It's their own imagination,' said the triumphant president outside the parliament building against cheering fans.