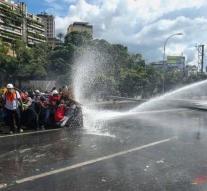 caracas - Two Venezuelan opposition leaders were wounded in Caracas on Monday in protests against Venezuela's government.

Opposition leader Henrique Capriles speaks of an ambush. 16 others would be injured at the protest march. Capriles submits a complaint. A picture shows that he has blue spots on his face, claiming himself after a soldier hit him.

Opposition leader Carlos Paparoni also got injured. He was thrown out of the water cannon by the force of the water and needed sutures.

Protests against the Venezuelan government have killed dozens of people since the beginning of April. Hundreds of people were also injured. The protesters want to resign from President Nicolás Maduro and demand early elections.

Since April, 2815 participants have been arrested. According to human rights activists, 1240 of them are still held.