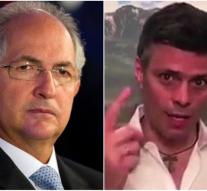 caracas - Two opposition leaders in Venezuela were taken away from their homes where they were arrested. That has declared their families Tuesday on Twitter.

It is about Leopoldo Lopez and Antonio Ledezma. The families are responsible for President Nicolás Maduro. He won a controversial election on Sunday for the constitution of a constitutional assembly, giving him much more power. The opposition boycotted that election.