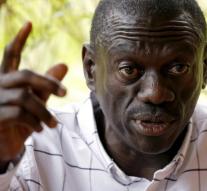 kampala - Ugandan opposition leader Kizza Besigye has been indicted for treason because he disputed election victory of President Yoweri Museveni and himself as 'alternative president' has declared. That said, a government spokesman Saturday.

The indictment represents a significant escalation in the series of confrontations between the government and the opposition leader, who has been arrested several times, and the authorities have accused of assaults and intimidation. The indictment could lead to the death penalty.

Museveni, who has been thirty years in power, was last Thursday reinstalled after his disputed election victory in February. To prevent protests blocked the authorities this week, Facebook, Twitter, WhatsApp and other social media. Besigye himself was arrested Wednesday in the capital Kampala and taken to Moroto, 500 kilometers from the capital to the border with Kenya. There he was indicted late Friday night.


,, He has openly expressed its intention to topple this government, which is against the constitution, '' said government spokesman Shaban Bant Ariza.

An official from the party of Besigye, the Forum for Democratic Change (FDC), admitted that a ceremony was held in which their candidate was sworn in as president. A video of it was put online.

Museveni won the election with 60 percent of the vote, against 35 percent for Besigye. The opposition leader rejects the outcome of the hand and wants an international investigation into the state of affairs. He had grounded most of the time since the elections on 18 February.


Besigye was in 2005 even accused of treason, but then there was a judge according to insufficient evidence.