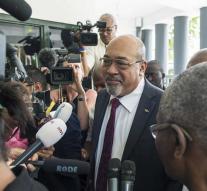 - Surinamese President Desi Bouterse is again guilty of interference in an ongoing lawsuit. That said, an MP of the opposition Suriname in response to the news that Bouterse wants to block the resumption of December Murder process by invoking national security.

Mahinder Jogi, faction of the main opposition party VHP, says that by applying constitutional article 148 now has again been interfering in an ongoing process. In 2012, this according Jogi was discussed when parliament adopted a controversial amnesty law. That's when it happened a few days before the judge advocate would express his sentencing. The court-martial then decided to suspend the process because the board felt should review the Constitutional Court or amnesty law would be unconstitutional.

According Jogi now occurs the same situation. Thursday another meeting of the council of war on the roll. Even now, it is intended that the same judge advocate will speak his closing speech. At present it is still unclear what the application of Article 148 means the plenary session on Thursday. Jogi goes provisionally assume that it simply continues the session.