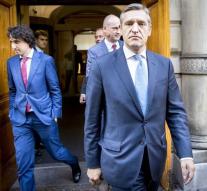 - The government still hopes to reach an agreement with some opposition parties about the outcome of the referendum Ukraine. A joint meeting Monday was mostly scanning. The opposition now waits to Prime Minister Mark Rutte to come.

Rutte and Minister Bert Koenders (Foreign Affairs) spoke with the leaders of CDA, D66, Christian Union, GroenLinks and SGP. The government wants to know which solution they can live. Also coalition parties VVD and PvdA moved on. Rutte, the opposition needs support in the Senate where he has a majority.

In April, voted by a large majority in a referendum on the treaty. Rutte then had to go find out in Brussels in a way that does justice to the no vote. He has to get the room promised for next month with a response. The opposition has previously indicated that justice must be done to the outcome of the referendum.

After the meeting, the party leaders kept aloof. ' We have heard and let us know, 'said D66 leader Alexander Pechtold. ' Heard nothing new,' was later told by the opposition. ' We wait and see what the government comes along. '

The fact that the group leaders wanted nothing to say is interpreted as positive in government circles. ' The door is not closed yet beaten, which is profit. 'A new consultation is not excluded. It was the first time that government and party leaders sat around this table together.

From the beginning Rutte has said that it is difficult to find a way out. A VVD event in Spijkenisse he said Monday to the assembled media: ' I was pessimistic and am still pessimistic 'Tuesday he discussed the issue by telephone with EU President Donald Tusk..\n  \n  \n   advertisement

The opposition parties were not invited to the consultation are angry. ' VNL has requested a letter to Rutte about backroom referendum on Ukraine. What is it all secretly discussed? ', Twittered Louis Bontes by To Netherlands (VNL).