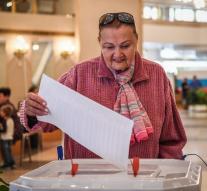 moscow - The liberal Russian opposition has made a surprising success at local elections in Moscow. Political veteran Grigori Jawlinski's party Jabloko conquered 180 of the 1502 seats in towns. The opposition party had previously held 25 seats in the Russian capital.

Government Party United Russia, according to official results, has become the largest in Moscow. That party got about three quarters of the voters behind it. The work of local representatives in parishes is largely symbolic.

The election did not happen without incidents this year. Mayor Sergej Sobjanin dismissed two senior officials after a video appeared on YouTube. These images show how one of the government officials seems local buyers to buy, The Moscow Times reported. They were offered envelopes with 'a bonus'.