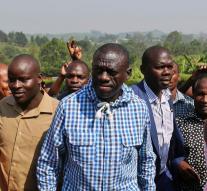 kampala - Ugandan opposition leader Kizza Besigye is Friday for the third time this week arrested by police. That happened in riots at the headquarters of his party FDC in the capital Kampala.

Meanwhile, the counting of the votes for the presidential election in full swing. With approximately counted more than a third of the vote emerges a victory off for the incumbent President Yoweri Museveni.

Besigye was arrested Monday and Thursday. According to him, the elections are not fair and it is fraudulent counts. The police Friday used include tear gas to disperse supporters of the opposition leader.