Home / World / OPCW confirms use of sarin in Syria 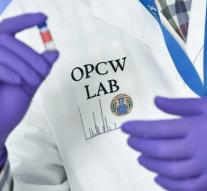 the hague - The Organization for the Prohibition of Chemical Weapons (OPCW) has confirmed that in March last year the nerve gas sarin was most likely used in the Syrian city of Ltamenah. This is stated in a report by the special investigation committee that was presented on Wednesday. The team members also concluded that chlorine gas was used in an attack on a hospital. The bombing took place on 24 and 25 March 2017.

The findings of the OPCW mission are based on separate statements from witnesses, epidemiological research and samples taken in the environment. The collection and analysis of the material and the interrogation of people took a long time before a final judgment could be formed.

The report on the events in Ltamenah is shared with the countries that are members of the Chemical Weapons Convention (CWC) and has also been sent to the UN Security Council.