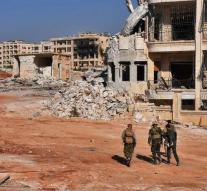 - The Organisation for the Prohibition of Chemical Weapons (OPCW) condemns both the Syrian government and the terrorist organization Islamic State for the use of banned chemicals. For whatever means it goes, is not yet disclosed.

At the same time the Russian Defense Ministry urged Friday to the OPCW on a delegation to send the Syrian city of Aleppo, as evidence would be the use of chemical agents by the rebels in that city. The rebels occupied the eastern part of Aleppo. They have almost certainly used as a chlorine gas according to Moscow.

The OPCW is an independent international organization, based in The Hague. The organization was established with the aim to prevent and destroy them the use of chemical weapons. The OPCW is working with the United Nations. The treaty purpose dates from 1997. Fifth, all members of the UN member countries (Egypt, Israel, South Sudan and North Korea).