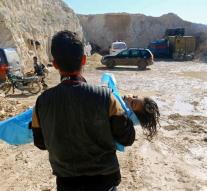 the hague - The Weapons of Chemical Weapons Organization (OPCW) has received reports of 45 attacks in Syria, suspected of poison gas. There has been a long list of likely cases since 2016, General Ahmet Üzümcü said in The Hague on Friday.

One of the last and deadliest examples dates from April 4 when Khan Sheikhoun came to life in more than eighty people. OPCW experts have found that victims are exposed to nerve gas sarin by tissue research. Üzümcü did not want to confirm that the Syrian army is responsible, even though the French intelligence service says that it has been proven.