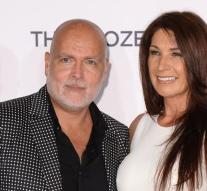 london - The 52-year-old brother of Kate Middleton's mother has been charged with maltreatment after he had fallen his wife Julie-Ann with a left-hand corner.

Gary Goldsmith and his 47-year-old wife would have quarreled with their alleged cocaine use until they got drunk. A taxi driver prevented the uncle of the Duchess from Cambridge from hurting his unconscious wife.

The taxi driver told the Daily Mail that Jo-Ann did not leave himself unpunished during the quarrel. 'It was mutually shaved and she hit him with the flat hand in the face. Goldsmith lost his glasses. When he bumped her, she fell to her head with her head. '

The woman was then taken to hospital.

Goldsmith was already known as the Black Sheep of the Middleton family. During the royal marriage of Kate, Goldsmith had no reserved place in the church and Kate's mother Carole did not want to be seen with her younger brother in public.