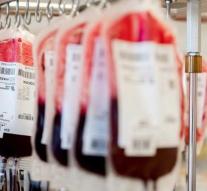 mechelen - Belgium is virtually due to its plasma plasma stock AB. This is because fought for the life of one patient who needs up to fifteen bags every day for weeks.

The Belgian Red Cross talks about a 'very exceptional situation' and calls on people with the rare blood group to come to plasma at one of its donor centers. In Belgium only 5 percent have blood group AB. Only 0.75 percent is AB-.

In mid-July, the organization already called for because 'plasma exchanges' in the same patient 'slim the AB plasma significantly.' The patient's treatment has started again, according to the Red Cross.

Plasma is the fluid in the blood in which the blood cells circulate. Sometimes that plasma becomes 'sick' because it contains too many harmful substances or proteins. Ill plasma must be replaced by donor plasma.