Home / Tech / One in six girls being bullied online 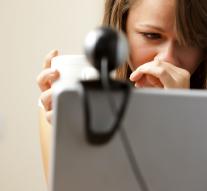 - Every year more than 400,000 Dutch fifteen years or older bullied in cyberspace. Girls aged between fifteen and eighteen years of age have to deal most often with cyberbullying.

People are on the Internet face slander, stalking and blackmail. Research by the Central Bureau of Statistics (CBS) show that women (3.4 percent) to make it more often than men (2.9 percent). Women often become victims of online harassment by a former partner.

In the age of the minors, the percentage of victims of cyberbullying highest. Among the girls had more than 15 percent to do with it, almost twice as much as boys of the same age. According to the CBS plays that girls are very active on Facebook and Twitter, an excellent platform for cyberbullying.

Homosexual (5.5 percent) and bisexual (4.9 percent) men are online more often bullied than heterosexual men (2.8 percent). Gay men especially have to deal with the proliferation of personal photos, videos and gossip. In women, there is no difference at such harassment for sexual orientation.