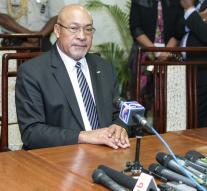 - Suriname's President Desi Bouterse must still be prosecuted for his role in the December murders in 1982. That the Court of Justice determined following a complaint lodged by the survivors against the Public Prosecutor (OM). Reported NIS Tuesday based on reports of the Surinamese newspaper de Ware Tijd.

The so-called December 8 trial was suspended in 2012. This happened after the controversial Amnesty Law was passed by a large majority in the National Assembly, Parliament of Suriname. This was granted amnesty for all crimes, including the December murders. Many countries, including the Netherlands, had strongly criticized it.

Relatives of victims file a complaint in August this year. The complainants claimed that the Court of Justice could issue a warrant of further persecution. That happened under the Ware Tijd now. On its website, the newspaper speaks of a " very reliable source ". Officially, the decision has not yet been disclosed.

If the message is correct, it means that according to the NOS that the lawsuit should be resumed and there should be punishment demands on the table for Bouterse and other suspects. The current president at the time of the December murders army chief and the highest man of Suriname which was then run by the military. Bouterse has always denied he murdered political opponents. This weekend he repeated those words.