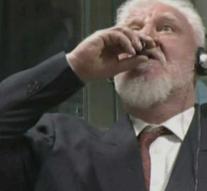 the hague - No criminal offenses were found during the suicide of Slobodan Praljak. The Croatian former general (72) died last November after having taken a drink in the courtroom of the International Criminal Tribunal for the former Yugoslavia. He did this after the judges sentenced him to twenty years in prison. He then became unwell and died more than two hours later in a hospital in The Hague.

Research by the Public Prosecution Service shows that Praljak had received no help from others in his suicide. To investigate that, an attempt was made to find out how the bottle of poison came into court. However, no indications have been found that show how and when he obtained the poison.