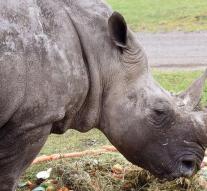 - The oldest rhino in the world is deceased in a German zoo. The zoo Serengeti Park in Hodenhagen announced Wednesday that the white rhino Molly at the age of 54 has gone.

Molly came in 1974 from Namibia in the safari park on the outskirts of the Lüneburg Heath. She has become quite elderly for white rhinos are on average about forty years old. She was the world 's oldest, appears, according to the zoo from international data. Molly had all those years eleven descendants.

The herd of rhinos in the German park now employs ten animals.