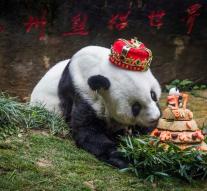 beijing - Basi, the world's oldest captive panda, Wednesday celebrated its 37 year anniversary. For the occasion she wears a crown and they treated to a special birthday cake in the Fuzhou Giant Panda Research Centre in the south of China.

Tourists Wednesday took many pictures of the birthday Basi already sipping a soup of flour, eggs and corn in a bowl shaped cake. In those years included the animal has reached the age of 140 years.

Pandas can only be fed fluids and a small amount of bamboo leaves, reports state broadcaster CCTV. Basi suffer from high blood pressure and has a few years ago had cataract surgery, but generally they are in good health, according to the broadcaster.

The authoritative International Union for Conservation of Nature qualifying last September the status of giant pandas still vulnerable and threatened. The survival of the species is still dependent on special protection programs, say conservationists.