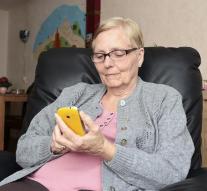 amsterdam - More and more Dutch fifty years and older are in possession of a smartphone. According to research by Telecompaper had at the end of the first quarter, 84 percent of the Dutch a smartphone in the age group 50-64 years. That was a year earlier to 67 percent. At over 65 grew smartphone held from 54 to 63 percent.

It also appears that consumers buy their smartphones more often in a store instead of online. The researchers do not exclude that there is a connection between the strong growth of smartphone ownership by the elderly and this increase. Traditionally, seniors make less use of online stores.

Samsung is still the market leader in the Dutch smartphone market with a share of 45 percent. However, Apple wins, according to the research. Nearly one in three Dutch owns an iPhone, nearly three percentage points higher than a year earlier. Apple is popular especially among young people.