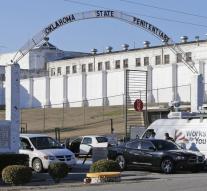 - The US state of Oklahoma performs next year no death penalty anymore. It came to an agreement Friday with three prisoners awaiting their execution. The reason is the doubt about using the right tool in the injections administered .

A court ruled that must first be thoroughly examined whether the State complies with federal regulations on the use of injections. Richard Glossip, one of the men awaiting execution, was last month told a few hours before the execution that his execution had been delayed by the governor.

Examination had shown that the wrong substance for the injection was delivered. Oklahoma had already problems with the death penalty. In 2014 suffered the condemned murderer Clayton Lockett tremendous pain after being injected.

Moreover, it took far too long before he died. After the running of the entire protocol was investigated for the death penalty and revised.