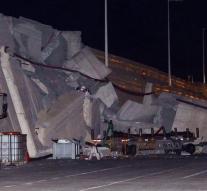 madrid - Due to a ferry accident, about 60,000 liters of fuel has arrived at Gran Canaria. The vessel struck a pier on Friday night with about 140 passengers aboard. Accordingly, according to the regional authorities, a fuel line in the port leaked.

The local authorities struck a great alarm. Special teams are trying to dump the 3 km long and 400 meter wide oil spill on Saturday. The fuel floats on the water at Las Palmas and Telde, the two most important places on the touristy Spanish island.

Most ferry passengers remained unharmed, said a spokesman for the company that owns the ship. Some keepers suffered minor injuries. According to the company, the cause of the collision is a technical failure on board the ferry. Therefore, the current would have fallen out.