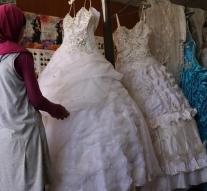 - In Germany, more and more young girls to marry. According to child protection in the country of Germany had last year certainly thousand girls who were married, often with older men.

It would be child marriages among refugees, but also Roma families. The actual number is possibly much higher, reports the newspaper Die Welt am Sonntag.

The child raises the minimum age to marry, which stands at eighteen years to handle much stricter. Now over sixteen sometimes allowed an exception. Many of the child marriages, however, are out of sight of the authorities place.


The high numbers also come because the refugees couples have arrived from countries where child marriages are allowed.

The Netherlands has child marriages. According to information from the national government that there would be 250 annually.