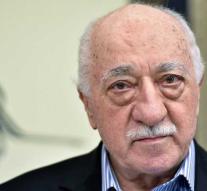 istanbul - The Turkish authorities have ordered the arrest of dozens of army officers. According to state press agency Anadolu, they are suspected of having ties with the organization of Fethullah Gülen, who is held responsible by Turkey for the failed coup in 2016.

The authorities are looking for 68 suspects, including 22 colonels and 27 lieutenant colonels. Sources within the office of the chief prosecutor in Ankara tell Anadolu that the suspects had telephone contact with Gülen employees. The clergyman lives in exile in the United States, who refuse to hand him over to Turkey.

The Turkish authorities argue that the Gülen movement wants to overthrow the government with the help of supporters infiltrated in, for example, the army, the police and the judiciary. Critics accuse the government of using the failed coup as an excuse to tackle political opponents.