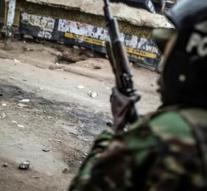 mombasa - Four armed men shot two Kenyan police officers on Sunday guarding a church. One agent died on the spot and the other later returned to a hospital. The attackers went out with the weapons of the two agents, police said.

The incident occurred at an Anglican church in Ukunda, a place south of the coastal town of Mombasa. The police suspect that the attack is the work of al-Shabaab, an extremist Islamic group from Somalia who has attacked more frequently on Kenyan soil. Kenya is one of the countries participating in an international peacekeeping force in Somalia.