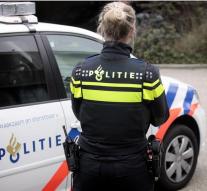 - An officer of the police eastern Netherlands was fired Friday because she is suspected of theft in a store. Against the officer is notified, police said Saturday.

The woman was already held in April outside function. After completion of a disciplinary investigation force management decided to dismiss the woman.

The police unit east of the Netherlands comprises the provinces of Gelderland and Overijssel. Police have not reported from the region, the fired officer.