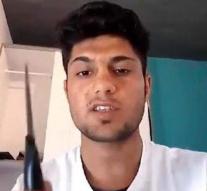 - The 17-year-old boy five people wounded Monday night in a train at the Bavarian Wurzburg, may not Afghan, but a Pakistani. He lied according to the German channel ZDF about his ancestry so that his asylum application would be approved.

The boy, who was registered in Germany as Riaz Khan, went Monday night travelers attacked with an ax. He would have done in the name of terrorist organization Islamic State. A special unit of the police, who happened to be nearby, the boy shot dead as he tried to attack them.

According to ZDF came to the boy, named by IS Muhammad Riyadh, probably from Pakistan. Sources within the security forces have reported that he spoke during the attack in a Pakistani dialect. At his Pakistani documents were found at home. Incidentally, agents found that a homemade IS flag.


The bloody attack on the teenager were five passengers injured two victims in Hong Kong Tuesday fought for their lives.