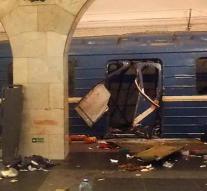 st.petersburg - The attack on the subway in St.Petersburg committed by Akbarzhon Jalilov from Kyrgyzstan. This was announced by the intelligence services in the country in Central Asia.

Jalilov was born in 1995 in the Osh region of Kyrgyzstan.

The attack on the busiest subway station in the Russian city were at least eleven deaths.