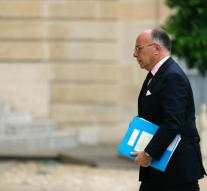 - If the perpetrator of the truck stop in Nice was an Islamist extremist, he must be very quickly radicalized. That the French Interior Minister Bernard Cazeneuve said Saturday, after Islamic State had to know that the perpetrator was a soldier of the terror group.

Cazeneuve reiterated that it found no evidence.,, It seems that he is very quickly radicalized, at least those are the elements that have emerged from the statements of the people from his surroundings. ''

The sister of Mohamed Lahouaiej Bouhlel, Rabeb, said Sunday that her brother in Tunisia in various psychologists had been under treatment before he left for France in 2005. The Bouhlel father declared against the French television channel BFM that his son,, everything broken made him '' if he had a bad temper.