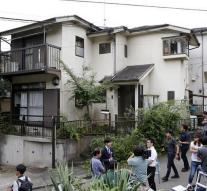 - The man Tuesday night in a village near Tokyo nineteen disabled stabbed in their sleep, had already announced his action in February and has been treated for it. On 2 March, the 26-year-old Satoshi Uematsu 'cure' explained notify Japanese police sources.

'I can erase 470 disabled people's lives,' the 26-year-old Satoshi Uematsu wrote in February in a letter to the president of the Japanese parliament. 'I want a world where severely disabled people who are not self-employed can live at home and do not participate in society, to step out of life. '

Uematsu also announced in his letter that he would murder 260 clients during a night shift. The former employee of the institution where the casualties was immediately put fixed and recorded. Presumably he is no longer monitored after his release early March.


Uematsu in the night of Monday to Tuesday resurfaced at the institution and established a bloodbath. He gave himself after his act to the police.