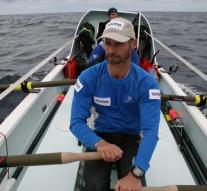 ferragudo - Ocean rower Ralph Tuijn Saturday to start his solo journey across the Atlantic. He just took his rowboat Algea from Ferragudo in the south of Portugal.

The plan is to stabbing the ocean alone and unaided. He hopes 50 to 55 days later to set foot in French Guyana (Latin America). Tuijn wants to break the current solo world record of 96 days over a month.

It is already the fifth time Tuijn cross the ocean. In March last year he settled with four British rowers also already the world record by stabbing across the Atlantic in 52 days. A year later, died this record, which was reduced to 51 days.

With an extremely heavy rowing regime, which he rows sixteen hours a day, Tuijn hopes to break this world record.