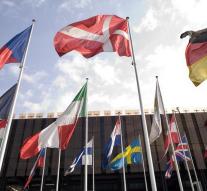 luxembourg - The objections of Hungary and Slovakia against the obligation to take asylum seekers from Italy and Greece are unfounded. The spread of asylum seekers across the EU is a proportional tool for helping the two Mediterranean countries to process the migrant crisis of 2015. That will be the Advocate General of the European Court of Justice on Wednesday.

The opinion of the Advocate General is not binding, but is usually followed by the court, which pronounces after the summer. Hungary and Slovakia had gone to court in Luxembourg after voting on a special ministerial council in Brussels on the distribution of refugees in September 2015, as well as the Czech Republic and Romania. The majority was for and the plan to spread 120,000 refugees from Italy and Greece in two years through a quota system was adopted.

Hungary and Slovakia wanted the court to declare that decision void because there would be no legal basis, procedural mistakes were made and it was not a good response to the migrant crisis. The court rejects all arguments.