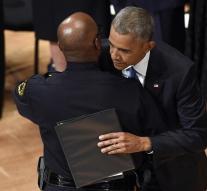 dallas - President Barack Obama on Tuesday at a memorial service in Dallas for the five officers shot his appreciation for the work of the American police.,, Our streets are not soldiers or militia, but public officials, '' Obama said.,, They rarely hear a thank you. But we flood the streets with guns. Children come easily to a gun than a book or computer. ''

Obama noted progress in the fight against ethnic conflicts but still sees prejudices.,, Despite the improvements, there is little consolation for those people who are victims of violence. We must ask ourselves whether the ethnic fissures will ever be bridged. Discrimination does not just disappear. Yet I have seen greatly improve the relationship between black and white in my lifetime. Who denies that, before the bet is ridiculous. ''

Obama stressed that the United States based on the rule of law.,, We're suffering in us somewhere yet to see any sense. As unlikely as it sounds, we have come very far together. We need to offer again standing in despair. ''