Home / World / Obama will visit Greece during the 'farewell tour' 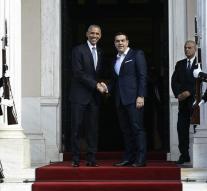 athens - The outgoing US President Barack Obama said Tuesday during a visit to Athens underlined the commitment of his country with Greece and the rest of Europe. A strong and prosperous Europe is also good for the world and the US, he said. Also in the future his country will assist the Greeks in their efforts to overcome the financial crisis.

'The reforms were not easy for the Greek people, but necessary,' Obama said, who is in his last international trip as president. But 'austerity alone does not create wealth', debt relief and other strategies are needed to Greece by helping through this stage.

In connection with the visit of Obama prevailed a state of emergency in the Greek capital. Access roads to the airport were closed to the center and also diverted in downtown traffic was. Demonstrations were banned in the center, but several unions have called for protests in the immediate vicinity.