Home / World / Obama: We hit ISIS harder than ever 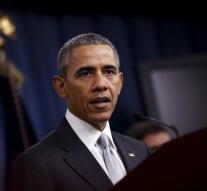 - Islamic State has lost 40 percent of the territory it had captured the terrorist movement in Iraq. That US President Barack Obama said Monday.,null, We hit them harder than ever, '' he said in an update on the fight against ISIS.

According to the president, the leaders of the terrorist group one by one off. ISIS-leaders can not hide and US message to them is : you're next. ''ISIS has no successful ground operation since the summer, performed in Syria or Iraq, Obama said. He acknowledged that ground forces of US allies,null, a very tough battle to face. ''